In a vision I saw the opening scene of the movie “Dancing with Wolves”. The soldier was on his horse between two opposing armies and he lifted a white flag and rode courageously between them. His life was given in surrender at that moment for the good of others.

The next scene was the same opening scene only I was the one on the horse waving my white flag as I looked at the face of Jesus on the other side. I rode fearless in complete surrender to Him to the other side unharmed.

The scene then changed to a fully engaged battle between two armies, some were on foot and some on horses. They had weapons of swords and rifles. Slowly I began to walk through them waving my white flag as I looked to Jesus standing looking at me on the other side. I walked through this battle completely surrendered to Him on the other side unharmed.

The scene changed again and this time it was a raging fire before me. I looked into the fire and saw Jesus on the other side. I began to walk into this fire waving my white flag, with my eyes fixed on Jesus, completely surrendered to Him standing on the other side. I was not burned or harmed.

The vision ended and left me with such a sense of courage and fearlessness. I could sense in my whole being what true surrender means. I knew surrender was a key to release heaven over me and into any tribulation. I knew surrender was a key to overcome anything, loving not your own life unto death. I knew Jesus was always there for us to see. As we look to Him, see Him and wave our white flag we walk unharmed through anything that comes our way. I got a revelatory glimpse of how my personal daily time in the secret place with Jesus would become a hiding place of safety for me through out my lifetime on this earth.

Raise you white flag Janee, See Jesus, and Keep on walking toward Him in peace. He has become you secret place and will forever be your hiding place. He will always cause you to triumph in Him.

Oh for grace to live in complete Surrender. Be Still and Know that I am God. 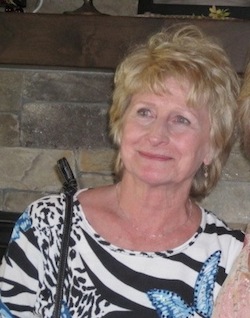